Some little known facts about vegan/vegetarianism.

There are many reasons for being vegan/vegetarian; among them are a consciousness for the environment, health, and the rights of animals. There are so many benefits that this lifestyle supports that the only reason for not being vegan/vegetarian would be the unawareness of the advantages and a resistance for personal preferences, of which we will discuss here.

The first argument that always arises with the discussion of veganism/vegetarianism is the type of  diet that people have. Globally, people are conscious that a vegan/vegetarian diet is complete in vitamins, minerals, and fiber. However, the topic of protein always arises. The human body needs protein, particularly the nutrients and amino acids that come from it. When meat protein is cooked the levels of amino acids drops considerably in the composition, and therefore the level of protein as well.

People believe that meat is the only source of protein or that it is superior to vegan/vegetarian protein. Actually, some plant based protein like spinach for example has higher levels of amino acids. At the same time, quinoa or broccoli is much richer in amino acids, that are essential and with a high content in vitamins and minerals. In addition, because they also contain a high amount of fiber and are less acidic than meat, they are also much easier to digest. In the end the body can absorb the nutrients of vegetables much easier than meat.

The second argument, that relates to the previous point, is about the physiology and evolution of the human body. Some are convinced that our organs are adapted for the consumption of meat. This idea comes from the fact that acid is produced by the stomach for the purpose of decomposition of food (called chloric acid). The body is constantly fighting to restore PH balance. Due to this, some medics have noted that the level of acid is decreasing each year of the human life. According to Doctor Rodrigo Gonzalez Gaete, surgeon doctor, the level of cloric acid in the stomach of a carnivore is much more concentrated than that of a herbivore. It could be an adaptation that is not suitable for the human being. But is this a temporary adjustment of the organ or a long term adaptation? Only time will tell. 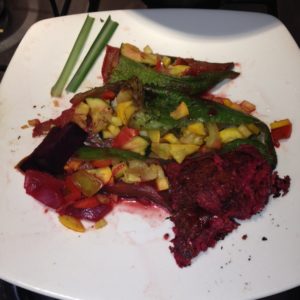 The third argument in favor of vegetarianism/veganism has to do with the mistreatment of animals. It isn’t just animals in the industry, but all animals in the food chain. For example, in the United States, wolves are hunted because naturally they prey on live stalk. However the residents, with the objective of protecting their “property” and the live stalk for the purpose of selling or eating, threaten the lives of wolves (Cowspiracy). Being vegan/vegetarian is about protecting wildlife as well.

To add, being vegetarian to prevent the mistreatment of animals is a fallacy. It’s true that products made of leather, gelatin, many sweets and pharmaceutical capsules are derived from animals. Those that are worried for animals are more vegan. Vegans avoid consumption of all animal products, including eggs and dairy, like milk and cheese. Overall, being vegetarian or vegan is having a greater consciousness of the world around us.

In summary, being vegetarian/vegan includes so many more benefits: health, environmental beneits, and benefits for the continuation of the food chain in which we are all part. To eat meat and use animal products is still very common at this time and represents the preferences of many human beings. However, the state of the world is changing and hopefully with it, our ways of life will change for the betterment of our health and wellness.