Luz in Spanish means light. It also means Electricity. BMS Direct, a local mail based marketing agency in Forest is shining the light and providing its own electricity. BMS has begun investing in solar power to run its facility. Green thinking is the next phase of smart business investment and profit. Not only does it have the potential to save money, is sustainable, creates jobs, encourages growth, it also has some sweet environmental side effects. Just ask Yvon Chouinard, founder and owner of Patagonia.

I had the pleasure of meeting with James E. LaPrade Sr., Owner of BMS Direct. He is also a very good family amigo. I remember meeting James and his wife Mel, and kids James Jr. and John many years ago at the lake. I was a kid at that age, but didn’t know then what good friends James and Mel would become and the kind of respect I would gain for both of them as we got older. 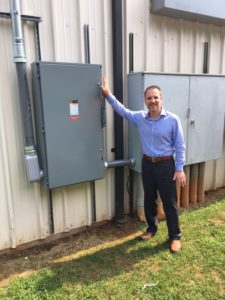 I rode my bike last week to BMS Direct, off Grave’s Mill Road, 2.4 miles away from my house to meet with this friend. He has some new trinkets that I wanted to check out. These trinkets will produce an average of 295,000 kwh of energy per year, cost $402,000, and weigh 43,000 lbs. They supplement approximately 45% of the energy consumption at the building. It energizes me just talking about it! These trinkets are solar panels. 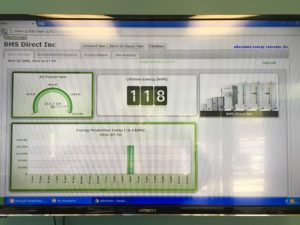 The panels themselves come made in China, a big proponent and director in the green movement. There are 722 of these babies to be exact came from the motherland to the heart of central VA. With a nice southerly exposure on the BMS facility, these panels are responsible for producing approximately 1,000 kwh daily, for a saving of $2,000+ per month for this large production facility, and lucky for the company a 30% federal tax credit. James informs that he has already seen many benefits along with all those savings. Even though total expected ROI won’t be seen for another 6 years (with an average 7 year return). However, a 15- year warranty is guaranteed with the panels. That includes repair and parts. James is already so happy with his investment that he’s already putting panels in place at his home. 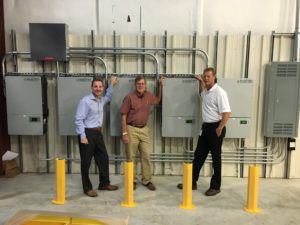 r. LaPrade says the initial investment and commitment. When best case scenario commitments are not fulfilled in terms of investment, sometimes caused by a lack of long, sunny days the company will see a absence of returns. The key to a successful venture in solar James says is to do your research with vendors, types of panels, and location. He stated he started looking at the feasibility of solar in 2016. It didn’t take him long to decide it was, and here we are, 2017, touring around the building powered by the sun. Although I didn’t get on the roof that day, it was cool to see pictures hanging up around the office of the second largest commercial solar installation in the state (the first being Ikea in northern VA). 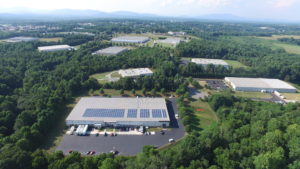 It is quite inspirational to see the progressive change of small businesses across the US. Although at the federal level, it seems that the country is moving away from green commitments, the state and individual level has not ceased to push forward in this direction. Innovation is continuing to make its way into the corners and heart of Lynchburg, VA. I’m so excited to see the influence in our town and what is to come!